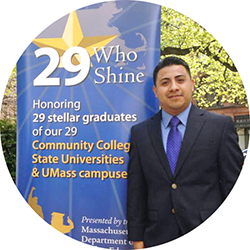 Jose Alfredo Cruz had a secret aspiration before he even officially enrolled at Berkshire Community College. The 28-year-old, originally from Oaxaca, Mexico, Cruz is the first in his family to go to college. After graduating high school, he moved to Wilmington, N.C. He later relocated to the Berkshires where he has relatives.

He worked at a bagel shop in Great Barrington for eight years. He felt appreciated by his employers (they became like his second family) and enjoyed the work, but started to feel like he wanted to do more. He came to BCC and met with Eleanore Velez, BCC's multicultural admissions counselor and coordinator of the institution's multicultural center.

During one of their meetings to discuss his options, Velez showed him a picture of one of BCC's "29 Who Shine" student representatives. The annual award recognizes outstanding students representing each of the Commonwealth's 29 public campuses. The honorees are chosen because of their academic achievements and record of student leadership and community service.

"I was inspired by all the amazing stories she (Velez) had to share," said Cruz.

"It was clear to me that to have a successful career at BCC I had to dream beyond achieving an associate degree. I needed to have bigger goals."

He began taking classes at BCC in 2013. A dedicated scholar and student leader, he is president of the Student Government Association, a member of the Multicultural Student Services Organization, volunteers with MassPIRG and has been involved in the institution's year-long Latino American event series. Most recently, Cruz served as a lead organizer of BCC Hacks, a 24-hour hackathon held in April 2016, which attracted students from throughout New England. Meanwhile, he worked 40 hours a week or more at a local restaurant.

His hard work and persistence paid off. He was selected as BCC's 2016 "29 Who Shine" representative.

Each student honoree was asked to select a faculty or staff member who had the greatest impact on their college education and experience. Cruz selected Velez.

"Eleanore Velez has been a mentor and role model since my very first day at Berkshire Community College. She has inspired me to believe in my dreams despite any adversities. She has given me the confidence to go beyond my own expectations."

It was an incredibly special day. He was joined at the ceremony by Velez, BCC President Ellen Kennedy, Vice President for Student Affairs & Enrollment Services Michael Bullock and several friends and family.

Cruz beams with pride when he reflects back upon the event.

"That day will always serve as my reminder that hard work pays off."

While at the ceremony, he finally revealed his secret aspiration to Velez.

"He told me that he knew when we met in my office and I showed him the picture of the '29 Who Shine' recipient that he was going to work as hard as he could to earn that same achievement," she recalled. "He had a goal."

His path to his degree hasn't been easy. He credits faculty and staff at BCC for helping and supporting him. And, his mindset and determination played a huge role in his success.

"I want to inspire people to know that everybody can do it. If you are willing to make those commitments and sacrifices you can do it," he said.

Cruz will graduate from BCC in June with an associate degree in Business Administration. He plans to transfer to Baruch College in New York City and eventually aims to own his own business. 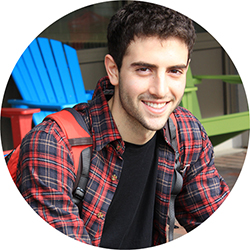