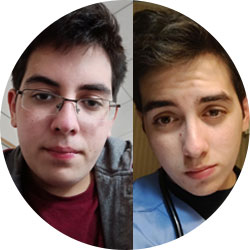 Seventeen-year-old identical twins Gavin and Ethan Trautman may look startlingly alike, but according to Gavin, they are in many ways “polar opposites.” Gavin is a double major in math and political science at Kenyon College, a small liberal arts school in Gambier, Ohio, while Ethan is a nursing major at Berkshire Community College. As they create their individual career paths, they often reflect on a strong common bond between them — BCC, the place where their educational goals took shape.

It’s a family affair. Their mother, Karrie, is Coordinator of One Stop Operations at BCC, while their father, Brian, is Adjunct Faculty, Philosophy.

The college is part of who we are as a family,” says Gavin. “I was always exposed to BCC because my mom and dad have worked there in various positions over the years.”

Karrie encouraged her sons to take the Accuplacer exam at young ages, just before they started high school at Columbia High School in East Greenbush, New York. Both passed the exam and began taking classes at their own pace. Gavin started with Introduction to Sociology, and Ethan signed up for Composition I.

“It was a great experience. It was nothing like anything I’d taken in high school,” Gavin says of his first course at BCC. “Everybody was just as eager to learn as I was. The material was fast-paced but manageable. I gradually added more and more classes.”

Ethan credits his mother with being his inspiration.

My mom could tell I was kind of bored in high school, that I wasn’t really learning. She asked if I wanted to take college classes, and it just took off from there.” He and Gavin earned enough credits to graduate high school a year early. While they went their separate ways — Gavin off to a traditional four-year college in Ohio and Ethan remaining in Pittsfield — both agree that BCC has paved the way for their academic success at an accelerated pace.

When Gavin arrived at Kenyon College, he wasn’t struggling with acclimating to college as many people his age do. “I had already taken college courses at BCC, so I knew what to expect. I knew how college classes were structured and what professors expected of me,” he says. “BCC not only helped me to stay academically focused, even during the pandemic, but it also helped me understand how to succeed in a traditional college.”

In fact, Gavin can take advanced classes earlier than his peers and double-major with fewer requirements because of the credits he earned at BCC. “It’s been immeasurably helpful. I get to do so much more because of the head start I got at BCC,” he says. With a lifelong interest in politics and an analytical mind, Gavin says his majors complement each other and will prepare him well for a career in data analytics or data science. “In order to understand the government and the public sector in general, it helps to look at it from an analytical data lens,” he says.

Meanwhile, Ethan finds himself continuing his education according to plan. With an associate degree already under his belt, he has completed 30 of 60 credit hours in UMass Amherst’s RN to BSN (Registered Nurse to Bachelor of Science in Nursing) Program and plans to take the remaining 30 credits online. “From there, I want to go out and see what I like to do,” he says. “I want to get a taste of everything in the nursing field before I commit to something.” Once planning to go into medicine, Ethan decided to pursue nursing instead because of his love for interacting with patients. “I want to be able to provide that personal, next level of care. The philosophy of nursing is the ability to focus on the patient holistically,” he says. “Plus, it makes more financial sense.”

That financial sensibility is also reflected in his participation in a work-study program at BCC, where he helps out with clerical tasks in the One Stop program. “We’re tight-knit group, and not just because my mom is there,” he says with a laugh. “I like being there, and it’s a plus to earn money while I’m in school.”

A quality education rooted in community

Gavin finds the quality of education he received at BCC to be on par with Kenyon College. “Both schools have a small student-to-faculty ratio and both have rigorous classes,” he says. “When I was at BCC, just being able to have that personal connection with professors, being able to go to office hours, and for them to know my name was really impactful. I definitely wouldn’t have succeeded in the way I am now if it wasn’t for BCC.”

Gavin says he’s heard plenty of negative connotations about going to community college, but he wouldn’t change a thing.

Community college is not a last resort. It’s a stepping stone, a center of learning where people from all different backgrounds can connect to better their lives and better their communities. Community college might be for people who are laid off and want a new career path, or for people like me who want to get their gen eds out of the way, or for people who can only take one course at a time because they have kids to feed,” he says. “Instead of the public perception of community college as a school for those who aren’t prepared for college, we should view it as a place to learn how to do the jobs that are essential to the community.”

The twins have many favorite parts about BCC, but to Ethan, two things stand out. First is the scenery. “I love how on campus, especially in my nursing labs, I look out the window and see these beautiful mountains. It’s so calming,” he says. Second: the people he’s met. “High school was kind of cookie-cutter, but at BCC you meet all kinds of people. I like how it’s a melting pot.”

Gavin also considers the diverse student body to be one of BCC’s strongest assets. “My favorite part about BCC was the first couple days of every class. It was so cool to see all these people coming from all different places in life with one common goal. Some had kids, some were much older than I was, others were still in high school, and everything in between.”

At just 17, Gavin and Ethan have a mature outlook on life and where it might take them, but they both credit BCC with getting them started in pursuing the fields they love.

Take a chance. If you want to develop as a person, if you want to grow professionally, go to a community college. It’s okay if you don’t get in your dream school. It’s okay if you change your path. If you’re doing something you enjoy, you can do so much more than you think you can,” Ethan says. “Just do it. You never know where it might take you. One class when you’re 15 might change your whole life.”

Gavin, a vocal proponent of community college, echoes that sentiment. “If you have any inkling at all to continue your education, I highly recommend starting with community college, even if you only take a couple courses and end up at a four-year school,” he says. “Community college is designed to take you from your life experience and translate that into beginning a college education. For me, BCC is a lot more than one line on my resume. It’s a formulative part of who I am, how I got my education, and how I am able to succeed.”