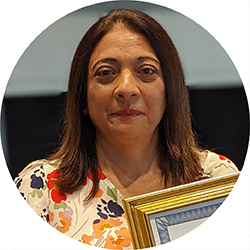 Helping others comes naturally to Martha Escobar, who recently graduated BCC with an associate degree in psychology. While Martha never expected accolades for her instinct to help, her efforts haven’t gone unnoticed: She is the winner of a prestigious 29 Who Shine award, representing BCC among fellow public institutions of higher learning in the Commonwealth.

The Massachusetts Department of Higher Education launched 29 Who Shine in 2011 to recognize 29 outstanding student graduates who show exceptional promise as a future leader. One winner chosen from each school demonstrates an ability to contribute to the civic and economic wellbeing of the Commonwealth.

“For as long as I have known her, Martha has been driven by her goal of supporting women who have survived domestic violence. Her educational trajectory has been shaped by that powerful motivation, and I am so happy to see her dedication to the people of our community be recognized,” Fisher said. “Martha has been a motivated, successful and hard-working student throughout her time at BCC. In addition, she has been consistently active in making our community a better place, especially for women and immigrants.”

“Commensurate with her superb academic work has been her service to the community. For more than a decade, she’s been interpreting, advocating, advising, facilitating community forums and producing radio programming for a variety of organizations,” Klug said. “Martha Escobar has taken the Berkshires by storm and become indispensable.”

Martha’s journey began in 1999 when she immigrated to the United States from Bogota, Colombia, where she grew up with two sisters and three brothers. She enrolled in BCC’s free Adult English to Speakers of Other Languages (ESOL) program called Project Link, designed to prepare non-traditional students for college.

BCC was close and convenient for me as a mom with a young daughter, and as an ESOL student who was nervous to start college for the first time. I received so much help and support from tutors, TRIO and my professors. I learned and grew not only academically, but as a person.” - Martha Escobar, 29 Who Shine Winner.

She credits Senior Admissions Counselor Eleanore Velez and her ESOL teachers with providing her the inspiration to continue her studies.

Martha’s favorite classes at BCC were Conspiracy Theories in American History, taught by Christopher Laney, and Women’s World Literature, taught with Julianna Spallholz. “We had such interesting class discussions and lectures. Both classes fascinated and intrigued me,” she says.

Her love of learning hasn’t stopped with her associate degree. She plans to eventually continue her studies and earn a master’s degree in psychology, all while continually helping others at her job and through community service — something Martha considers one of her biggest passions.

Through community service, I’ve learned that I can give my time and care to others in need, but in a way, I can also return all the help I received from countless angels since my time in this country. It makes me happy to help others, which I’ve liked to do as long as I can remember.”

At the Elizabeth Freeman Center, Martha guides victims of domestic violence and sexual assault through a 12-week program designed to educate and empower survivors. The curriculum includes defining what constitutes abuse; recognizing red flags in relationships; identifying characteristics of an abuser; learning coping techniques for anxiety and stress; understanding how to live in healthy relationships with others; and maintaining self-esteem and self-care, among other life skills.

As an advocate, Martha helps her clients with procedural matters like applying for restraining orders and presenting relevant documentation during court hearings, all while providing emotional support. She also works with other agencies to refer clients for services such as housing and childcare, and if clients are struggling financially, she helps them apply for assistance.

“The most rewarding part is seeing clients who are absolutely devastated become empowered again and realize that they don’t need to stay in a relationship of abuse,” Martha says. “But the most challenging part is when cases touch you on a very deep and personal level, and it’s hard to leave them behind in the office.”

Martha’s work with the bilingual community is particularly close to her heart. Because the Latino population has grown so much in the Berkshires, she says, it’s important for them to know there is help available.

They need someone who speaks the same language, someone with the same cultural background who can understand what they're going through. They need to share their experience and be comfortable being vulnerable. It’s such an important connection, knowing that someone will be there to support them, no matter what the circumstances.”

Furthering her efforts with the Berkshire immigrant community, Martha hosts a weekly radio show called Mundo Latino, aired on WTBR 89.7 FM (Pittsfield Community Radio). Joined by her daughter Deisy, they share local news and community information, accompanied by music. “It is a space in our community that celebrates the Latin language and culture, keeps our roots alive and welcomes guest speakers from the community,” Martha says. “We serve as a resource for the immigrant community, especially for newcomers, so they don’t feel alone, lost or isolated.”

That connection with the immigrant community is key to success for Martha. “I want to be a good role model for my daughter,” she says. “That means showing our new immigrant community that even though English is our second language, with hard work and effort we can accomplish big things and break down barriers.”

Winning the 29 Who Shine award is “a big honor and privilege,” Martha says. “It’s an incentive to keep going and continue my education, which one day I plan to use to help others.”

Martha lives in Great Barrington with her husband and daughter. In her spare time, she loves to dance, spend time with Deisy, take walks, read and exercise.