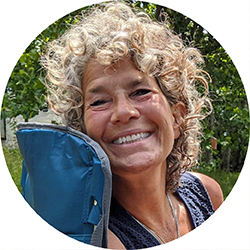 Assistant to the President

After spending a “wonderful childhood” in Lanesborough and graduating high school, Kim attended North Adams State College (now MCLA) for one year, left college behind and got married. She worked at jobs that offered shifts compatible with having school-aged children, and in her twenties, she took a few classes at BCC. “I didn’t return to BCC to join a program of study until I was 40, after my children were in high school,” Kim says.

My first class was a computer class. I knew nothing at all about computers! It was very scary. I felt so stupid with all the young people in the class that knew everything and I could barely work the mouse.” But she soon realized she was not alone, relishing the support of teachers and fellow non-traditional students. “BCC instructors truly care about your success,” she says. “If I had any problems, the teachers were right there when I needed them.”

Perhaps the person who influenced her most was now-retired Christine DeGregorio, leader of BCC’s non-traditional student organization and later the coordinator of TRIO (Talent, Resources, Initiative, Opportunity), a federally funded program that provides free support services to eligible students. “She encouraged me to keep going. I don’t think she realized how much of an encouragement she was to those of us who were trying to be students after so many years of being away from school,” Kim says.

After starting out in computer information systems, Kim eventually changed her major to business. She graduated from BCC in 2002, the same year her daughter graduated from high school. “I was the first in our family to go to college. It took me six more years to receive my bachelor’s degree. By then, I was 50,” she recalls. “My daughter received her bachelor’s degree before I did, but I did it. It’s never too late to go back to school.”

These days, Kim finds herself with a full plate and “never a typical day,” which is one of the things she loves about her job. In addition to administrative duties, she supports BCC President Ellen Kennedy by serving as a board liaison, sitting on the president’s cabinet, regularly communicating with state agencies, and organizing annual college activities and events.

I love working with Ellen. We’ve worked together for thirteen years,” Kim says. “We have a connection and work well together. I’m going to really miss her, both as a boss and as a friend.”

Though she’ll deeply miss her family at BCC, Kim plans to travel the country in a trailer with her husband, Chris (who she met at BCC), their dog Wilson, and their cat Vivian. After relaxing and enjoying the onset of retirement at their home in Hinsdale, they’ll start their adventure with a trip down the east coast, visiting friends and family along the way. But don’t expect her to adopt a southern address. “We’ll probably just travel during the summer months, because I don’t want to miss winter here. I love it!”