The Berkshire Community College (BCC) Players are proud to present two unique and hilarious satires, Endgame and The Bald Soprano. Performances will be held in the Boland Theatre at BCC’s Main Campus located at 1350 West St. in Pittsfield. 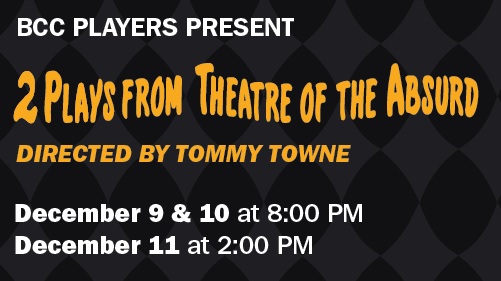 Classified as Theatre of the Absurd, the designation is for particular works of absurdist fiction written by a number of primarily European playwrights in the late 1950s, as well as the style of theatre which evolved from their work. The work focused largely on the idea of existentialism and expressed what happens when human existence has no meaning or purpose, therefore all communication breaks down.

Samuel Beckett’s Endgame falls into the category of theatre of absurd since it is a despairing play about hopelessness. The sense of despair is heightened by the fact that the characters are not waiting for anything other than death in the play.

The Bald Soprano, by Eugene Ionesco, is a hilarious, unique satire on the ordinary English middle class.

Performances will be directed by Tommy Towne.

Tickets may also be purchased at the door.