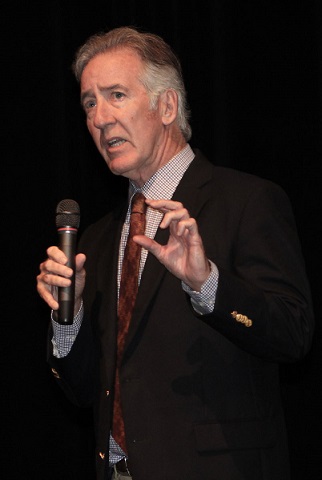 A little over 150 people attended to hear the Congressman talk about the legislative agenda and answer almost two-hours of questions from attendees.

Roughly 30 people came up to the microphone for questions with the Congressman - ranging from issues with the natural gas pipeline in Otis and Sandisfield to racial tensions in America, the idea of Medicare for all, and many questions about the Congressman's co-sponsorship of the Israel Anti-Boycott Act.

Neal also talked about the population decline and employment issues in the Berkshires, saying that across New England, "18,000 precision manufacturing jobs go unanswered." He also referred to an article in the Boston Globe on how Berkshire County residents still struggle to make ends meet while also being a cultural haven for wealthy tourists.

Kennedy said she hopes legislators and community members alike see the college as an open space for such public discourse on the pressing issues of the day. She said that compared to less-than-civil encounters between communities and politicians across the nation, "I feel so proud that in Massachusetts, our congressman and our senator are pushing to have these kinds of events to connect with their constituents, hear what their concerns are, and have a window into the soul of our community."

Representative Neal is the Ranking Member of the powerful Ways and Means Committee in the House of Representatives. As the top democrat, he advocates for the preservation and strengthening of such issues as health care and social security, and deals with all matters of tax and trade. Representative Neal has proudly represented Berkshire County since redistricting in 2012.

The college previously hosted U.S. Sen. Elizabeth Warren for a Saturday morning forum back on July 8, also in the Boland Theatre. The venue has a capacity for just over 500 people.