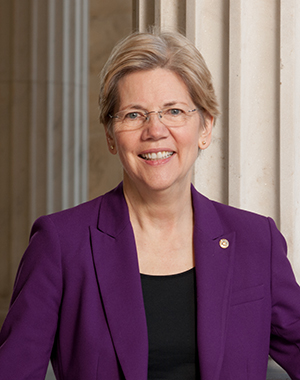 55th Commencement Exercises to be held Fri., May 29 at Tanglewood in Lenox, Mass.

Senator Warren was elected to the United State Senate in 2012 and is recognized as one of the nation's top experts on bankruptcy and the financial pressures facing middle class families. She has introduced the Bank on Students Emergency Loan Refinancing Act, which, if passed, would allow borrowers to refinance their public and/or private student loans to lower interest rates. The Federal Reserve estimates that Americans have amassed $1.3 trillion in student loan debt.

“We are elated to have Senator Warren serve as this year’s keynote speaker,” said Dr. Ellen Kennedy, BCC’s President. “Senator Warren is the embodiment of how hard work and dedication are rewarded with success. Her inspirational journey toward becoming a prominent lawyer and nationally recognized politician began with her working class family in Oklahoma, a story that is relatable to many of our students and alumni. Senator Warren’s efforts in Washington to combat the mounting student debt crisis speak to her commitment to helping students realize the American Dream.”

Senator Warren was a law professor for more than 30 years, including nearly 20 years as the Leo Gottlieb Professor of Law at Harvard Law School. The graduating class at Harvard twice recognized her with the Sacks-Freund Award for excellence in teaching. She taught courses on commercial law, contracts and bankruptcy.

She has written more than a hundred articles and ten books, including three national best-sellers, A Fighting Chance, The Two-Income Trap and All Your Worth. The National Law Journal named her one of the Most Influential Lawyers of the Decade. In 2009, the Boston Globe named Senator Warren Bostonian of the Year for her TARP efforts. TIME Magazine twice named her one of the 100 most influential people in the world and in 2010 called her a "New Sheriff of Wall Street." Senator Warren has been honored by the Massachusetts Women's Bar Association with the Lelia J. Robinson Award.

Senator Warren is a graduate of the University of Houston and Rutgers School of Law. She and her husband, Bruce Mann, have been married for 34 years and live in Cambridge, Mass. For a complete biography visit, click here.

BCC’s 55th Commencement will be held Fri., May 29 at 4:30 p.m. at Tanglewood in Lenox. The event is open to the public. Tickets are not required.