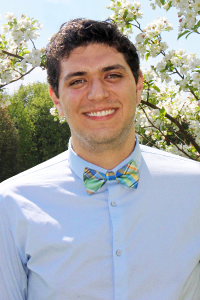 2015 valedictorian and will provide remarks at the institution’s 55th Commencement on Fri., May 29 at Tanglewood in Lenox, Mass.

A native of Ecuador, Carrión-Almeida came to the United States in 2009. He began working in the hospitality industry and strived to learn English. After becoming a permanent resident, he began his academic career at BCC in 2013 when he enrolled in the institution’s TRIO Program (Talent, Resources, Initiative, Opportunity), a federally funded program that provides free support services to eligible students.

While navigating the demands of a full-time course load, he typically worked sixty hours a week at local businesses to make ends meet. The Business Administration major will graduate with high honors.

“Juan has incredible energy, which he always directs toward good ends. He is either studying, working or helping other students - all day, all week. Throughout, he remains upbeat and optimistic,” states Dr. Frances Feinerman, BCC’s vice president for academic affairs and chair of the selection committee.

A member of Phi Theta Kappa, an honor society for two-year institutions, Carrión-Almeida has thrived both academically and as an active member of the BCC community. He has been involved in both the Student Government Association and the Multicultural Student Services Organization. In addition, he was chosen to be a Student Ambassador, a prominent leadership role for students who are dedicated to serving and representing BCC at campus and community events.

He was also nominated to be a STEM (Science, Technology, Engineering, and Mathematics) Scholar and tutored first year STEM students and assisted with their transition to college life. During the spring semester he interned in the Accounting & Controls Department at SABIC, a global innovative plastics corporation located in Pittsfield.

“I’m thrilled to serve as this year’s valedictorian. While the last two years have been very challenging, I proved to myself that I could earn a degree despite English being my second language and working long hours. This has motivated me to keep going beyond my own limits,” said Carrión-Almeida. “My success at BCC wouldn’t have been possible without the awesome faculty and staff whose goal has always been to teach students to learn.”

According to Eleanore Velez, admissions counselor and coordinator of the Multicultural Center at BCC, when Carrión-Almeida became aware that other states have one tuition for all students regardless of residency, he proceeded to educate himself and advocate for a bill that would allow in-state tuition for all in Massachusetts.

“While this position would not benefit him directly, he knows the transformative power of education,” said Velez. “Juan Jose understands how important education is to those who are still seeking the ‘American Dream’ and how a more educated population can make the world a better place. I'm very proud of his hard work and achievements and I will miss his friendly smile.”

Carrión-Almeida will attend the University of Massachusetts’ Isenberg School of Management in the fall.

The 2015 Commencement will begin at 4:30 p.m. U.S. Senator Elizabeth Warren will serve as the event’s keynote speaker. The event is open to the public. Tickets are not required.

For more commencement details visit our commencement page. Twitter users are invited to follow and use #BCCGrads.