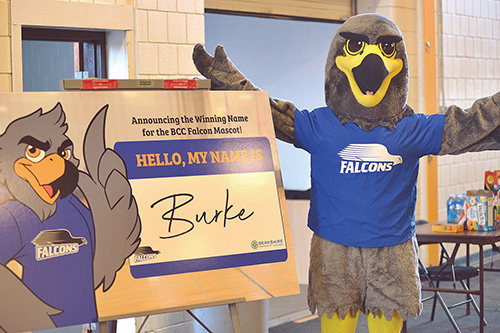 Berkshire Community College (BCC) announced the name of its brand new Falcons mascot on Saturday, Dec. 8, right before its 10:30 a.m. basketball game match-up between the BCC Falcons and Bard’s College at Simon’s Rock, in which BCC won, 87-26.

Earlier in the fall, BCC asked for and received more than 80 different name choices for its brand new Falcons mascot, which was introduced to the community for the first time during the Fourth of July parade in downtown Pittsfield this year. A committee winnowed the list of 80 choices down to four options, based on the reasons behind a submission or the apparent popularity of a name being submitted more than once.

The four choices were Tom (named after the first president of the College), Perry (as in the Peregrine Falcon), Freddie (an international, alliterative name), and Burke (a play on Berkshire). The Falcon mascot was present to help us unveil the winning name, after tallying the votes of more than 300 people across the community.

The BCC Falcon mascot can often be seen at the BCC Club sports games, like basketball and soccer, where they compete against other club sports teams ranging from UMASS to Yale. Additionally the mascot is a staple of many community events, having attended the Gather-In, Downtown Trick or Treat, and every Third Thursday in Pittsfield – and the Fall Foliage Parade in North Adams and the Festival Latino in Lee this year, to name a few.