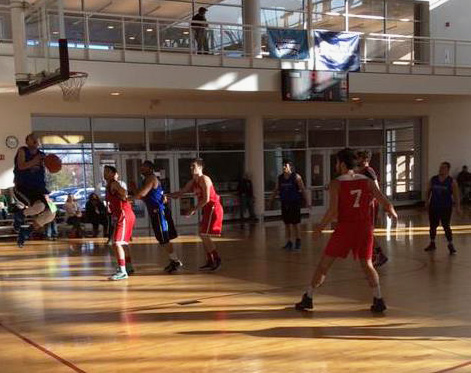 Tournament held at UMass Amherst. BCC, the only two-year institution competing in the men’s basketball bracket consisting of 20 teams, finished 4-2.

The Falcons, coached by BCC alumnus Eddie Pomales, beat Assumption College, Providence College, UMass Boston and Boston University in order to reach the semi-finals, earning the #5 seed heading into the playoffs. BCC lost to Northeastern, the #1 seed in the tournament, by nine points.

BCC was led by Keiland Cross, former Pittsfield High School standout, who totaled 99 points (averaging 16.5 a game) for the tournament weekend and 46 rebounds (an average of 7.7 a game). Other big contributors were Joe Wiggins with a total of 61 points and 21 rebounds, and Mike McMahon with 60 points and 32 rebounds. Both previously played for St. Joseph Central High School.

Cross was named as a selection on the five-player All-Tournament Team.

Last year the BCC Falcons finished in the NIRSA quarterfinals with a loss to Rutgers by seven points.

The BCC Falcons will play Simon’s Rock, Goodwin College, and Assumption College before the season ends. Their current overall record this season is 9-4, with other wins over UMass Lowell, American International College, Brown University and others.

BCC also offers Cross Country and Soccer teams. The Falcons Club Soccer team will play their first home game of the spring season against the College of St. Rose on April 11 at 6 p.m. under the lights. On May 9, the team will play an away game against Rensselaer Polytechnic Institute.

The Cross Country team recently began practices and will participate in their first community race on Sun., April 12 in Housatonic.